Customer satisfaction is our main priority, we value your feedback and opinions of our service, here is a small selection of our customers comments, we would love to add you to our list of happy movers: 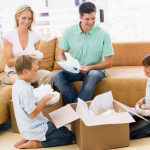 We had a very complicated move which involved clearing two houses and moving across the country. The Smooth Moves team made what could have been a very fraught experience into a pleasurable one. They were so helpful and calm, even when our plans changed several times during the run up to the move.

I am indebted to them for getting my family and I through this and would definitely recommend Smooth Moves to anyone - you just can't beat that personal touch. Lastly some of our stuff was put into Smooth Moves' storage for 9 months whilst we had the new house extended. When it was delivered there wasn't even a speck of dust on any of it. Thanks Smooth Moves - you rock!

Just a quick note to say a BIG Thank You to you and your staff for the great job your company did with our move last Thursday. I am sure moving 150+ Bonsai Tree as well as the content of a house is not a regular occurrence, but your lads took it in their stride. They turned up at the agreed time and got straight to it in an efficient manner.

They took great care with every item and made sure that everything that was not boxed was well wrapped and protected. On arrival at our new house they got everything where it needed to be and even plumbed in the dishwasher and washing machine while waiting for the other van to arrive.

Your staff were friendly and cheerful throughout the day and could not have been more helpful or accommodating, a credit to your company. From my experience on our moving day, I would have no hesitation in recommending you to anyone who wants a stress free move.

I just wanted to say THANK YOU to yourself and your lads for helping us move, we can not thank you enough for making our moving day totally stress less. Your lads are a real credit to the Company totally professional and courteous, a truly fantastic Company

Thank you once again

I just wanted to say a huge thank you for the professional, helpful, friendly and efficient way in which the staff did their jobs. They took a lot of the stress away. They dismantled beds and put them back up in the new house. I could not have asked for a better team of people. Good hard working chaps.

Hi, Moving is right up there with; actually I cannot think of anything more hideous, painful or stressful than moving house. We did it this weekend, I thought we didn't have that much stuff. That's a joke. Our two bedroom felt like 5 with so many cupboards that seemed un-emptiable if that's a word and that's just the packing process.

3 trips to the tip later enter the Smooth Moves crew. I picked them for two reasons, free boxes, no one else I called offered that and the deal clincher, they were the cheapest. They dropped the boxes off a week before the move, for a small deposit. We got three guys, most others I called it was only two. The crew were friendly and got on with it, they cracked on and were done well within 4 hours.

We were happy to get in to the new place. Nothing got broken or damaged and it was a Smooth Move. I know removal and storage companies have a reputation for being a bit shady. Not this one, they did what they said they would, reliable, professional, good value and did the job with a smile. 2 thumbs up from the Moss.

If you have any questions please do not hesitate to call, our friendly staff will be happy to assist your enquiry: Tel: 0116 3320810